New research from Resetting Normal: Defining a New Era of Work suggests that many working people believe they have been more productive during the pandemic. However, before celebrating success, we need to consider how people were able to improve their productivity, and the toll it is taking on us.

Much of the debate around the future of the hybrid office has focused on the issue of productivity. Are we more productive, creative, and collaborative when we work in a traditional office setting, surrounded by colleagues and managers? Or has working from home unleashed a previously untapped reservoir of productivity as we embraced the flexibility and freedom of toiling away without the buzz and distractions of the office?

New research suggests that many working people believe they have been more productive during the pandemic. But, more importantly, the data suggests we are happier about having the freedom and flexibility of working independently from the corporate office.

That was certainly a key finding in a new global study commissioned by LHH and The Adecco Group. Resetting Normal: Defining a New Era of Work, a survey of 14,800 white collar workers between the ages of 18 and 60, spread across 25 countries.

Contacted in Q1 2021, the respondents were spread across the ranks of senior leaders, frontline managers, and non-managers. They all had desk-based jobs, worked at least 20 hours a week and were required to work remotely during the pandemic.

When asked about their performance over the previous 12 months, 82 percent of respondents said their productivity either improved (40 percent) or stayed the same (42 percent). On its own, that metric would suggest that the shift to remote work was a success. 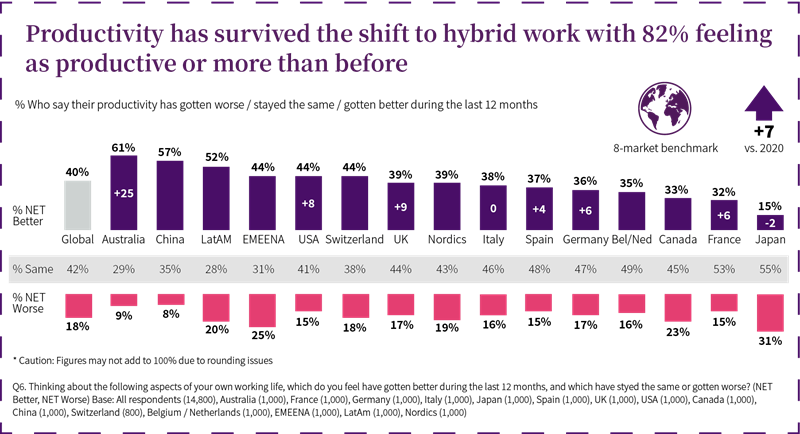 However, before celebrating success, we need to consider how people were able to improve their productivity, and the toll it is taking on us.

For a very long time, working people have suffered from a huge misconception about personal productivity. Or, as Brigid Schulte, director of the Better Life Lab at New America put it in a recent New York Times article, “we’ve long had this really erroneous connection between long work must mean hard work and productivity, and it never has.”

Our survey certainly suggests some of the perceived productivity gains may reflect the reality that many of us are simply working longer hours.

The question that employers should be asking themselves is, what is the cost of all those extra hours? Human capital experts have long warned about a “productivity cliff,” a point late in a long workday where people are so mentally and physically exhausted, they become less productive, or worse burned out.

With the threat of COVID-19, along with economic and social restrictions, it is impossible to make a direct cause-and-effect connection between remote work and overall mental and physical wellbeing. However, it is noteworthy that mental health was suffering at the same time that hours were increasing. One-third of all respondents said their mental wellbeing deteriorated over the previous 12 months.

But there’s yet another element to consider when analyzing the remote work phenomenon over the past 18 months, and trying to predict its impact on the future of hybrid work. Even with the longer hours and the toll it may be taking on us, a significant proportion of the survey respondents found the flexibility and independence that come from remote work was very satisfying.

Longer hours are an acceptable tradeoff for flexibility and autonomy

The survey found that 80 percent of respondents across all categories (leaders, frontline managers, non-managers) believe both employees and their companies will benefit from increased flexibility around where and when they work. And 71 percent believe that allowing more remote work in the future will be very important to them going forward.

What is it about remote work that so many people appreciate? Fully half of all respondents said it allowed them to provide better care to others outside of work, improved their work-life balance and improved their overall time management.

As a result, 49 percent of respondents from all countries report being happier about their working lives over the past 12 months. One note of concern is that there are different levels of happiness depending on their roles; senior leaders (64%) were more likely to report being happier with work, while managers (51%) and non-managers (43%) were less so. 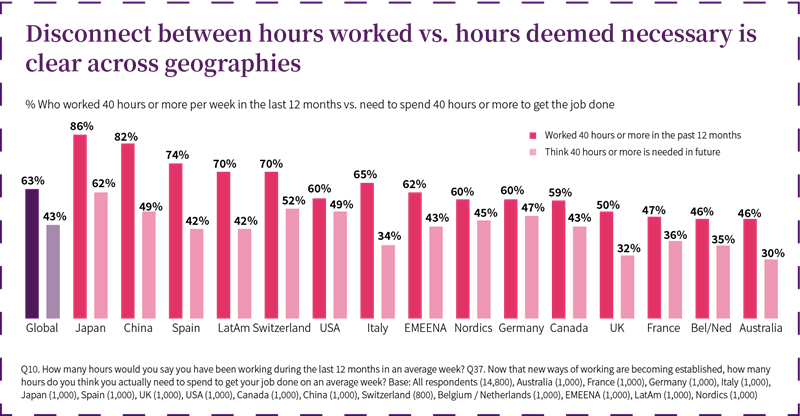 Workers want to completely change how productivity is calculated

Our experience working from home has amplified some concerns that working people have had for some time, particularly about the way in which their work has been assessed. Increasingly, working people want to be assessed on output, as opposed to hours.

Nearly three-quarters of all respondents said employers should re-think the length of the work week and how many hours employees are expected to work, and a similar number said employee contracts should focus more on the needs of the role and less on hours worked.

Unfortunately, there is little evidence that employers are in fact paying more attention to outputs rather than hours. More than half (52 percent) of respondents said their managers were more concerned about hours worked than outputs. This concern was most pronounced for senior leaders, 71 percent of which believe they are being judged solely on the number of hours they work, and not on the outcomes of that work.

One other important note: workers in countries that work the longest work weeks tend to be the most unhappy on the planet. Research on the happiest places to work shows a strong correlation with the LHH/TAG research. Countries like Finland, Australia, Denmark, Norway and Canada, all of which scored high on a survey listing the happiest countries to live and work, also happened to be the countries with the fewest number of people working more than 40 hours.

Taken together, these survey results present a stark challenge to employers. The pandemic, and all the changes to our work experiences that came along with it, make it very difficult to just go back to the way things were before COVID-19 arrived. Even when faced with a crisis, working people were clearly up to the task of maintaining or even exceeding productivity and overall commitment to their jobs. They worked longer hours, maintained or exceeded productivity, and sacrificed some of their mental and physical wellbeing in the process.

However, having had a taste of a more flexible and independent work experience, a clear majority of working people want this to become the new normal. Employers who hope to recruit and retain top talent while driving productivity, will have to build flexible working considerations, reimagined approaches to measuring productivity, and robust wellbeing offerings into their human capital strategies well into the future.

We can help build your career and find the next big opportunity.

With more than 380 offices around the world, find an office near you.

Learn more about our candidate services

Fresh Start, Fresh Tactics: How a New Approach to Upskilling & Reskilling Is Redefining the Workplace

The Future of Learning: Connecting People Who Want Jobs with Jobs that Need People