Some of the most compelling data came from the U.S. Bureau of Labor Statistics, which reported that it had recorded 4.4 million “quits” in September 2021, the highest monthly tally of voluntary separations since the bureau first established that metric in 2000. Another 1.4 million Americans left work because of layoffs, discharges, death and disabilities.

In Australia, figures from professional networking site LinkedIn indicate a 26 percent jump in Australian workers moving from one company to another in October 2021, compared with the same time in 2019, before the pandemic. While according to the Australian Bureau of Statistics (ABS) figures unemployed workers still outnumber jobs, employees with in-demand skills have more bargaining power than they have had in decades. Job vacancies peaked at 369,900 in May before the Sydney and Melbourne lockdowns, a record since the ABS started collecting the figures in 1979. The previous record before the lockdown was 232,600 in February 2019.

At the same time, only 34 percent of non-managers are satisfied with their career prospects. And almost half – 41 percent – are contemplating finding jobs with more flexible options. 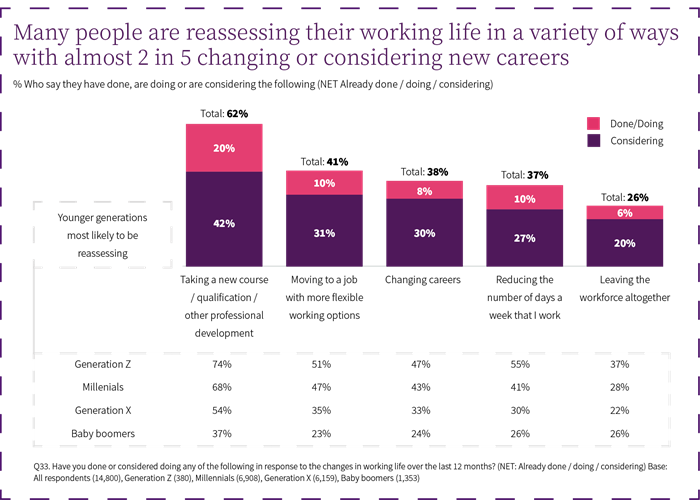 The appetite for career development, or a possible change in job or career, was most pronounced among Gen Z respondents (74 percent have or considered learning) and Millennials (68 percent), less so among Gen X (54 percent). Only slightly more than one-third of Boomer respondents were considering a learning opportunity. The same trend held in the category of moving jobs or changing careers. Gen Z (51 percent are moving and planning a move) were the most mobile, followed by Millennials (47 percent), Gen X (35 percent) and Boomers (24 percent).

In Australia trends were similar, with the exception of the Millennials (83 percent have or considered learning) who showed most willing in comparison to 74 percent of Gen Z respondents, Gen X were close behind (73 percent) with only 30 percent Boomer respondents expressing an interest. When it came to moving jobs or changing careers 39 percent of respondents in Australia are considering making a move while 19 percent have already seized the opportunity with Gen Z (74 percent) the most keen, followed by Millennials (58 percent), Gen X (52 percent) and then Boomers (30 percent). The writing is clearly on the wall. Your best people have been through a very tough time and they are starting to reprioritise their career goals and values. Employers that acknowledge this trend and take steps to engage with employees on career and skill development, may find that they occupy a safe port when the turnover tsunami hits.